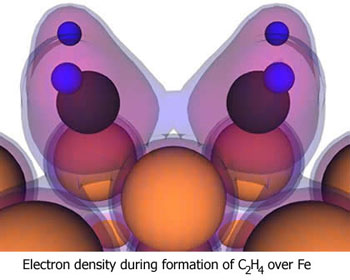 Global demand for methanol in 1999 was nearly nine billion gallons. Among other applications, methanol is used to produce formaldehyde, MTBE, and acetic acid.  A small – but steadily increasing – niche for this chemical is in fuel supply to steam reformers and to direct methanol fuel cells (DMFC’s).  DMFC’s hold out the promise of direct conversion of methanol to electricity, a process that can be as much as four times more efficient than combustion in internal combustion engines.  Before DMFC’s will be commercially viable, however, a number of technological problems must be solved.  Chief among these is the need to develop an electrooxidation catalyst that will both produce a high power density and be impervious to CO poisoning over time.  Platinum and platinum-ruthenium catalysts have been found to be effective in this chemistry, but improved catalysts are still needed.  Theoretical tools can assist in this process both by providing fundamental understanding of methanol behavior on currently existing catalysts and by suggesting new alloys that may lead to improved catalyst performance.

We are currently performing a systematic study of methanol partial oxidation on Pt(111). We have fully analyzed the methanol decomposition pathway that proceeds through hydroxyl O-H scission. To see a  movie of the proposed rate-limiting step in this process (O-H bond scission in methanol to produce the methoxy radical), together with the ensuing step in the reaction pathway (C-H scission of methoxy), click here.

We are in the process of evaluating an alternative pathway for methanol decomposition on Pt(111), the scission of a methanol C-H bond to produce atomic hydrogen and hydroxymethylene.  Preliminary results indicate that this pathway could be energetically competitive with O-H bond scission.

While methanol usage in fuel cells is our primary area of study, we are also interested in the methanol synthesis process.  Industrially, methanol is often produced over Cu/ZnO/alumina.  Although this process is quite valuable, much debate remains over both the active phase of the catalyst and the exact mechanism of methanol synthesis on these catalysts.  We have studied the partial oxidation of methanol (the microscopic reverse process of methanol synthesis from CO) on Cu(111) in an effort to gain fundamental insight into this reaction. To see a movie of the proposed rate-limiting step (C-H bond scission in the methoxy radical), click here.

For more information on this project, please refer to the following publications:

Methanol is a very import chemical compound that is used in the synthesis of other chemicals, such as Formaldehyde, Formic Acid, and MTBE. Although the use of MTBE fades out in the near future there are other applications emerging. Direct Methanol Fuel Cells (DMFC) are an interesting alternative to H2­ powered fuel cells and may become a major energy source.

Currently, methanol is industrially synthesized from CO/CO2/H2 mixtures (syngas) at high pressures (40-120 bar) on Cu/ZnO/Al­2O3 catalysts and temperatures between 200-300 °C. It has been proposed that the main source of carbon in methanol is CO2 and not CO. However, copper is also a very good catalyst for the water gas shift reaction, which is able to oxidize CO with H2O to CO2. The goal of this project is to determine a feasible reaction mechanism that explains the formation of methanol from CO2. Therefore we use Density Functional Theory (DFT) and investigate the thermodynamic and kinetic properties of intermediate elementary steps on the surface. From this data we can make conclusions about the stability of reaction intermediates and kinetic limitations of possible reaction pathways.

Adsorption and Dissociation of Dioxygen on Transition Metal and Alloy Surfaces: Optimizing the Cathode of Fuel Cell Catalysts

Oxidation processes catalyzed heterogeneously by transition metals have tremendous importance in the chemical, energy, pharmaceutical, and microelectronics industries. Examples range from the production of such important chemicals as methanol and ethylene epoxide to the removal of volatile organics in industrial emission. Oxygen is usually the preferred oxidant for its availability (air) and environmental friendliness. Therefore, an understanding of the surface behavior and surface chemistry of O2 is essential to improving existing processes and designing more effective catalysts. Furthermore, fuel cell technologies could be a major beneficiary. The reduction of oxygen is the primary reaction that takes place on the cathode of many types of fuel cells, and the activation of O2 is most likely the Rate Limiting Step for the entire fuel cell operation.

Of the many reaction possibilities open to the O2 molecule, one that happens perhaps most frequently is its dissociation into two oxygen atoms – which are much more reactive than the molecule itself. The dissociation of the oxygen molecule on transition metal surfaces is therefore of considerable research and practical interest. The dissociation of O2 is known to take place via different mechanisms on different metal surfaces. On some surfaces the oxygen molecule directly dissociates upon adsorption. On others, the molecule adsorbs initially intact into a precursor state. Subsequent thermal equilibration with the surface determines whether the O2 precursor desorbs or dissociates. Molecularly adsorbed O2 species have indeed been detected experimentally on various transition metal surfaces at low temperature (e.g., Pt(111), Pd(111), Ni(111), Cu(111), Cu(110), Ag(110), and Ir(111)). Their presence, even though elusive under real reaction conditions, is shown to impart particular characteristics to the dissociation of O2 on these surfaces.

We have used self-consistent, periodic DFT calculations to study O and O2 adsorption and O2 dissociation on several transition metal surfaces, including Ir(111), Cu(111) and Cu(211), and Au(111) and Au(211). Our goal is to ascertain the geometry and energetics of possible precursors on these surfaces, identify possible dissociation pathways, and determine the dissociation activation energies. We are currently studying the interaction of O and O2 with various alloys of Cu, Au, Pt and other elements. The primary emphasis will be on the optimization of the cathode catalyst for low-temperature PEM fuel cells.

For more information on this project, please refer to the following publications:

CO2 + H2 is an industrially important route to H2 production and plays an important role in many current technologies such as methanol synthesis, methanol steam reforming, ammonia synthesis, coal gasification, as well as fuel cell technology. Using quantum chemical methods such as Density Functional Theory (DFT), I have studied this reaction extensively on a series of ten late transition metals. This study has helped us to determine the characteristics that define a good WGS catalyst, and hence allowed us to screen for potentially active WGS catalysts.

Since Cu-based catalysts are used in industry for WGSR I have calculated detailed minimum energy paths for all the elementary steps on a Cu(111) surface using DFT and built a robust microkinetic model for WGSR on copper catalysts using the DFT-generated parameters. This model conclusively proves that the carboxyl mechanism is the dominant mechanism on this surface and points out that the formate species is essentially a spectator on the catalytic surface under typical WGSR conditions.

Preferential Oxidation of CO in the Presence of Hydrogen

As the energy sector moves towards hydrogen, hydrogen fuelled proton exchange membrane (PEM) fuel cells have been recognized as a promising energy technology for replacement of internal combustion engines in automobiles and other transportation systems. However, an important problem for the usage of PEM fuel cells is their sensitivity to low levels (ppm) of CO because CO easily poisons PEM fuel cell anode. A promising method to remove trace amounts of CO from H2 supplied to the anode is preferential oxidation of CO (PROX) in the presence of excess H2 .

An effective PROX catalyst should meet several important requirements: (i) show high activity for CO oxidation (ii) oxidize CO much easier than hydrogen (iii) function at temperatures similar to that of PEM fuel cells and (iv) be resistant towards deactivation by carbon di-oxide and water present in the feed. A good PROX catalyst should be able to selectively oxidize 10,000 ppm of CO to concentrations of less than 5 ppm at low temperatures, without decreasing the H2 content of the fuel gas.

The PROX reaction has been studied experimentally on supported monometallic as well as bimetallic catalysts extensively. Platinum, gold and copper based catalysts, like Pt/Al2O3 , Pt/A-zeolite, Au/Fe2O3, Cu mixed with ceria oxide have been shown to be promising PROX catalysts. In this study we have used a combination of DFT and microkinetic modeling to explain the superior low-temperature performance of Au and Cu catalysts, as compared to Pt catalysts. We have employed periodic, self-consistent density functional theory (DFT) calculations to address competitive CO oxidation (CO + O

H2O + O) on Au(111), Cu(111) and Pt(111). The geometry and thermochemistry of various reactive intermediates are studied, as well as reaction pathways and activation energies for the corresponding elementary steps. A rigorous barrier analysis scheme is implemented for the appropriate decomposition of the activation energy barrier of each elementary step into its major components. Finally, using the DFT-derived parameters for surface reaction steps and handbook values of gas phase reaction thermochemistry, we construct a simple micro-kinetic model to predict trends in PROX selectivity on Au, Cu and Pt surfaces as a function of temperature.

For more information on this project, please refer to the following publication:

Fischer Tropsch Synthesis (FTS) affords a direct route to produce clean hydrocarbon liquid fuel from syngas (a mixture of CO and H2). Traditionally coal or natural gas have been used as feedstocks but there is growing promise that biomass derived H2 could be utilized. Co and Fe are the conventional FTS catalysts but it has been recently found that Pt promoters significantly improve the performance of Fe catalysts. We seek to explain this Pt-promotion using ab initio techniques based on Density Functional Theory (DFT) and microkinetic modeling. A comprehensive model would lead to a better understanding of this important industrial process especially in the light of similar models for pure Co and Fe which have been previously developed in our group.

The next generation of gas sensor technology, designed for applications such as wearable sensors and wireless networks, must satisfy a number of criteria including low/no power consumption, light weight, small size, high selectivity and sensitivity, and operating in extreme environment. Chemoresposive liquid crystals (LCs) can be designed to meet these requirements, which makes them ideal candidates to develop future gas sensors. Our group’s goal is to guide the development of gas sensors that operate on a change in the interfacial properties between a solid surface and a LC film using computational predictions. We build on the vast knowledge of heterogeneous catalysis and surface science communities to develop principles for these chemoresponsive LCs in the soft matter community.

The detection principle of chemoresponsive LCs builds on the fact that the orientation of LC is determined largely by the interactions of the LC molecules (mesogens) with the surface (Figure, left). The binding of one surface monolayer of mesogens on the surface can dictate the perpendicular orientation of a film of LC that has a thickness corresponding to hundreds of thousands of mesogens (Figure, left). The homeotropic orientation of the bulk LC film can be characterized by polarized light microscopy (the sample is dark under crossed polars). If we introduce an analyte that binds to the surface stronger than the mesogen, the analyte displaces the mesogen from its binding site on the surface (Figure, right) and the LC film transitions to a planar/tilted orientation (Figure, right; the sample is bright under crossed polars). We use the readily quantified optical transition from dark to bright to detect the presence of targeted analytes.

We build computational models to understand the effect of the surface (ie., choice of metal cation/anion, monometallic metal, metal alloy, or metal-oxide), the chemical composition of the liquid crystal molecules, and additives to detect specific analytes (Nerve Agents, Cl2, O3, SO2, etc.). Despite the complexity of this problem, our computational predictions are in agreement 9 out of 10 times with experiments, and thus we can guide the experimental efforts to detect new analytes using a variety of surfaces and liquid crystal compositions.

For more information on this project, please visit the project’s website or refer to the following publications:

Tibor Szilvasi and Jake I. Gold
Department of Chemical and Biological Engineering
University of Wisconsin-Madison